Optical indicators of LED lamps and their physical meaning

Luminous flux : The light-emitting capability of the luminaire (related to the efficiency of the light source and light distribution system) characterizes the optical radiation power that can be felt by the human visual system.
Light intensity : luminous flux in a solid angle.
Irradiation intensity : The amount of light received per unit area used to evaluate an object being illuminated.
Emission intensity : The luminous flux emitted per unit area used to evaluate a luminous object.
Brightness : The physical quantity of the luminescence characteristic of the investigation area on the surface light source in the investigation direction.
Among the physical quantities such as luminous flux, illuminance, emission, light intensity, and brightness , brightness is directly related to the human eye’s perception. It should be considered as an important indicator when designing the luminaire and luminaire optical design.

In this scenario, the brightness of the scene is the part of the light reflected by the yellow arrow and reflected into the human eye.

LED light source : LED light source is the source of light. The lighting effect of the light is closely related to it. The optical design has a certain adjustment effect on the final effect, but the illumination light field will always bear the brand of the light source.
Luminous flux : measures the luminous ability of a light source.
Chip size, quantity, arrangement:
Chip layout density, chip layout uniformity, and the distance between the chip and the rim are all important factors affecting the light distribution design and optical quality.

The thickness of the phosphor, the width and shape of the boundary phosphor area are all important factors affecting the light distribution design and optical quality.

By integrating the Lagrangian invariants of all spatial angles of light emitted from all the light-emitting areas of the light source, we can obtain the Lagrangian invariant J of the entire light source, the size of which is determined at the beginning of the light source manufacturing, by the arrangement of the packaged chips, The coating state of the phosphor colloid, and the angle of the light excited by the phosphor is determined;
We need to make a reasonable evaluation of the overall design of the luminaire, that is, what kind of light source with a large optical aperture to make the required small angle luminaire.

For the inimum angle of the luminaire, there is a bottom theoretical evaluation caliber

Under the given constraints (light source, caliber, height, efficiency), try to achieve optical indicators, if not, make a trade-off;

Under the premise of realizing the optical index, transform the structural form of the lens and adjust the balance of the spot distribution;

Under the premise of satisfying the optical index and the spot distribution, the structural form of the lens is changed, and breakthroughs are made in terms of aesthetics and novelty;

The balance between material cost and process cost.

• There are 3 control degrees of freedom, the incident surface, the refractive index of the material, and the exit surface;

• For the far field is a circular spot, the lens is mostly axisymmetric, and the design is relatively simple;

• For far-field non-circular spots, the corresponding lens is a non-axisymmetric body, especially for some large polarization distributions, the design becomes very complicated;

• There is interface reflection, which is not conducive to glare control. 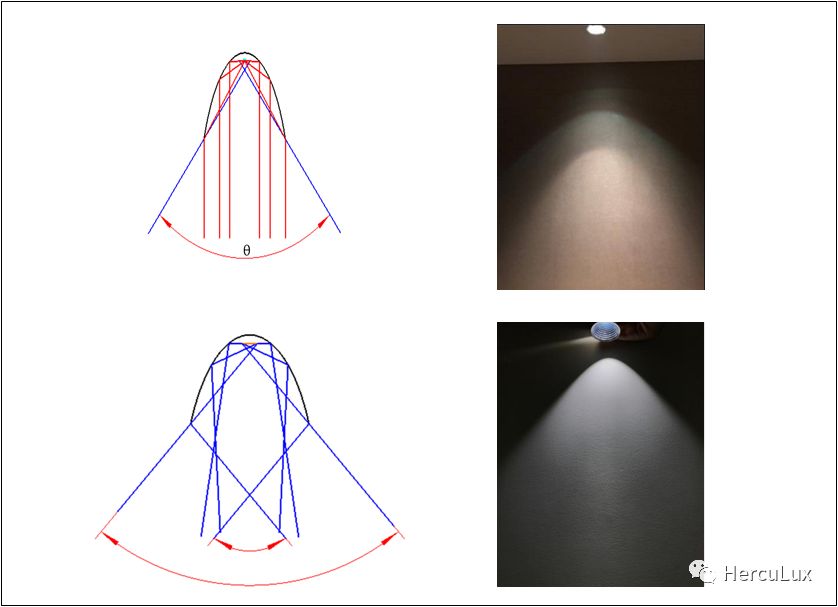 • Only one control plane of freedom on the reflective surface;
• Optical and structural design is relatively simple;
• There is no interface to reflect light, which is good for glare control;
• Some of the light is not controlled, the light from the source is directly emitted from the middle, the brightness is relatively high, and the glare is dazzling;
• The K value is lower;
• poor spot diversity;
• Less efficient.

• Use the lens to control the middle to directly emit part of the light, so that it is better fused with the light controlled by the reflector to improve the spot stratification;
• The K value has increased to some extent;
• The addition of a lens creates an interface that reflects light and creates glare.

• The light emitted by the light source is divided into two parts, the small angle part is concentrated by the intermediate convex lens, the large angle part is refracted into the lens body, and then the angle is controlled by the side total reflection, and finally the light exit surface is emitted;

• All the light emitted by the LED light source can be effectively controlled, and the lens efficiency is high;

• Changing the structural form of the lens can change a variety of spot patterns;

• There is an interface that reflects stray light.

Reflective reflection on the inner wall of the structural member

• Light comes from the light reflected from the lens interface, the light that is actively discarded during the design process, and the stray light that overflows the processing assembly error. • This part of the light is usually less energetic and usually appears in the form of background light in the illumination field. However, it is not excluded that the inner wall of the lamp is made of mirrored high-reflection material with a specific structure to seriously affect the spot quality.

• Use a black mask to absorb.

• Use a diffuse reflector to weaken.

• At the beginning of the lighting plan, the overall optical evaluation of the hood is optimized to minimize the projection of light onto the reflector, allowing the reflected light to be controlled, allowing it to blend well into the main spot.

Incorporating the design of the luminaire structural part into the optical design category, combined with the optical grading design, it is finally possible to achieve a good spot effect. 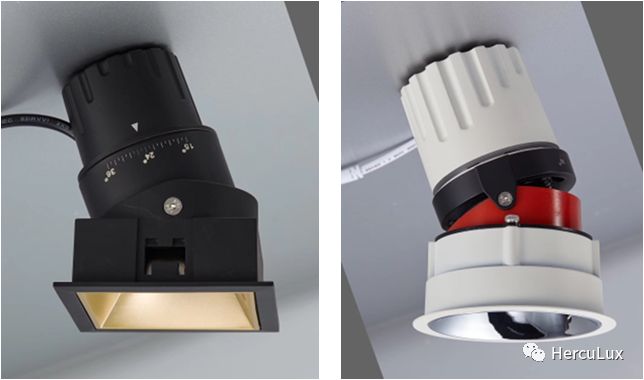 Thoughts on the application of lighting and the development of lamps

• 90% of the external information people get from the eyes, and the vehicle that the eye receives information is light.
• Good lighting is to let people observe the space and color information of objects when they feel comfortable.
• The light source illuminates the object, the object reflects or transmits the light, the light with the object information enters the human eye and is imaged onto the retina, and the brain analyzes the image so that the person’s presence information (size, brightness, color, distance, etc.) is perceived.

The human eye is equivalent to a camera that can automatically adjust the focus and auto-focus circle.

What is the object information that the human eye perceives?

• Luminance characterizes the amount of light and darkness on the surface of an object.

• Color characterization is the amount of wavelength combination and relative intensity of the object’s light.

• The absolute value of the brightness is too high, exceeding the normal acceptance range of the human eye.

• Unreasonable distribution, within the main perspective of the human eye.

• Increase the absolute light output and reduce the brightness of the light.

Purpose: To increase the light surface and reduce the surface brightness to provide a soft ambient lighting for the space.

Disadvantages: The material characteristics of the reflective area are usually Lambertian diffuse reflection, which produces a large amount of large-angle glare.

Solution: The reflective area of the optical device as a design basis, resorted to the light intensity, angle-controlled.

• The concept of luminaire design changes (the combination of optics and structure, the luminaire should be as small as possible).